The CTPA and ‘Free From’ 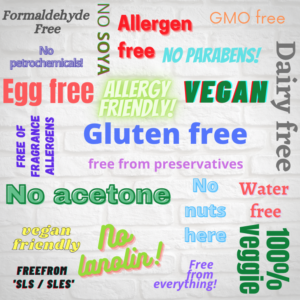 Last month, the Cosmetics, Toiletries and Perfumery Association (CTPA) — “the voice of the British cosmetic industry” — published a Position Paper on The Use of ‘Free From’ Claims in cosmetics. You can download a copy here. It is only two pages, and well worth a read.

Free From and Us

There is great pushback on ‘free from’ statements on skincare products from cosmetic authorities and the mainstream beauty industry, a phenomenon the equivalent of which is virtually absent in the world of food and drink.

There, few baulk at ‘gluten free’ or bat an eyelid at ‘milk free’, with wide recognition that these statements are there to help those who must avoid certain food proteins in order to stay safe and well or, again, to help vegans and vegetarians, or those following halal or kosher diets. Nobody interprets ‘nut free’ as false virtue signalling; nor as an attempt to denigrate nuts as evil toxins.

But in the world of cosmetics such statements are fraught, none more so than ‘parabens free’, which became a popular cosmetic claim following the publication of a research paper on a study which found parabens traces in breast cancer tissue, thus potentially implicating them in the disease — a proposal which many experts considered dubious, remains unproven and controversial now, but sowed seeds of fear which remain.

Almost two decades on, with parabens having been given numerous bills of safety for use as preservatives, the issue remains divisive, impacting and polarising opinions regarding ‘free from’, leaving little room for nuanced voices in the moderate centre ground.

As the position paper says:

But when does “free from x” denigrate x, and when does it not denigrate x? Which are the ingredients which bear a “presumed negative perception”?

It is not made clear.

In the same way that unsightly graffiti shouldn’t result in the banning of spray cans and paint, the questionable use of ‘free from’ statements shouldn’t mean that the facility to use them should be outlawed. Fortunately, the CTPA’s position paper acknowledges this:

‘Free from’ claims are not all prohibited – some may be permitted when they allow an informed choice or target a specific group of end users. For example, ‘free from animal-derived ingredients’ in a product intended for vegans.

But there is no mention of consumers with cosmetic allergies in the CTPA Position Paper. Not a word about allergy or allergens appears. Are those allergic consumers allowed an ‘informed choice’ of absence of their trigger ingredients? Do they not count as “a specific group of end users”?

I have always had, and hope to continue, good and cordial relations with the CTPA, but can’t help but wonder whether the omission of allergens and allergy considerations in the document is a deliberate avoidance strategy.

Are the consequences of allergy in the world of beauty so ‘unglamorous’ — all that scratchy skin! all that redness! — that it’s simply easier for the purposes of this matter to sideline them, thereby keeping the larger cosmetic houses happy?

Or could the reason be less cynical: that if the industry were to concede to ‘free from x’ statements for all cosmetic allergens, then it would essentially green-light such statements for literally hundreds and hundreds of ingredients, given that so many can be potential allergens? (There are over 100 fragrance allergens alone, before we even get to preservatives, food allergens and others.)

Inconveniently, these allergens include parabens themselves — which are found on all the main contact dermatitis patch testing panels.

Perhaps, ultimately, it’s just too much for the industry to handle, permit, and legislate on. Which allergens can be ‘free-from’d’ — and which can’t?

We shared our feelings on Twitter with the CTPA, and they were kind enough to acknowledge and to respond.

“Our view is that advertising the absence of an ingredient may be unhelpful for people with allergies as this would just cover one, or a very small number of possible allergies. Indeed, the common ‘free from’ claims do not cover ingredients most frequently associated with allergy.”

In twenty years of involvement in the business of allergy and ‘free from’ in one way or the other, I’ve seen and heard quite a lot.

But I have to say that “free from labelling is unhelpful to free from people” is a new one, even for me.