In my dear dad’s day, men’s grooming toolkits consisted almost exclusively of Brylcream, an industrial soap, some shaving foam and razors. The Brut I’d buy him for Christmas as a boy was a late addition to his repertoire. Or was it Old Spice … ?

But by the time I reached young adulthood myself, moisturisers for men were just starting to lose their novelty value and were becoming fully integrated into the modern’s man regime.

I can’t recall the first one I used. My grooming memories from that period are in fact dominated by a shampoo — The Body Shop’s Ice Blue Shampoo, which was minty and tingly and reputed to stimulate hair follicles. (Nope, didn’t work – as anyone who has known me for some years will verify.)

I later got hooked on Lush’s Cosmetic Lad moisturiser, and used it for years. Lush divide opinion, I suspect because they use parabens preservatives, and some find the pungency of their fragrancing overbearing, but I still like this product a lot — it’s like melted nougat and I’ve always credited it for looking after my skin in my twenties and thirties. 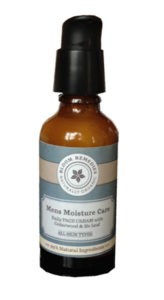 But what about free from men’s skincare?
Natural men’s grooming has not surprisingly been slower to take off.

In the Free From Skincare Awards, we introduced the Men’s Grooming category in 2013, and the inaugural winner was a small Scottish brand called Live Native, for their Head to Toe for Men Remedial Moisturiser. All the entries that year were moisturisers, bar a shaving oil from Bathing Beauty, which took Silver.

The moisturisers took the top prizes for a couple more years — Lavera in 2014 for their Sensitive Moisturising Cream, and Bloom Remedies‘ excellent Men’s Daily Moisture Care, the overall winner, in 2015 — but we did attract a broader mix of products, including a shampoo, a face wash, a face scrub, and a few beard oils.

But it wasn’t until 2016 that some more radical men’s grooming products were entered — one of which happened to win. It was Kokomelt’s delicious Sugar Scrub Hand Cubes, which I still fondly remember. We also got an eye cream that year, and a fragrance free body lotion, and a men’s ‘fit pit’ deodorant.

In 2017, we got a men’s body oil from Kernow Spa, some anti-ageing products from Samaya Ayurveda, and a night cream and eye gel from Feisc, all entered into the grooming category. But it was, finally, to be the year of the face oils, with Rosalena’s Beauty & The Beast Face Oil triumphing. 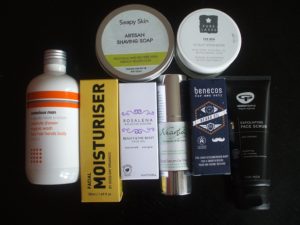 I’d been waiting for face oils to make their mark in men’s grooming for some time. I’d personally discovered them a few years earlier, through the Awards’ Oils and Oil-based Serums category — whose entrants were mostly fragranced and aimed at women, but some of which were fragrance-free and clearly unisex. Having processed the feedback of the female testers, and therefore having read about the transformational benefits of some of the oils, it made me want to try some — and I’m glad I did. We then also started to send one or two oils to our male testers, and although a few took a while to get used to using them (you only need a few drops), for others, they were a revelation.

Oils are magnificent, and the category is almost invariably the highest scoring one of all in the Free From Skincare Awards.

So what of 2018 — and beyond?
Well, all will be revealed on July 5th, along with the other category winners, but the men’s grooming Shortlist this year (pictured above) reveals a nice mix of products — oils / moisturisers, a gel, a scrub and a shaving soap, and the eagle-eyed among you will note that Rosalena are back defending their title.

In fact, we had so many products that we had to look beyond our dedicated male testers this year, and recruit some partners and grown-up sons of our regular female testers! All did a sterling job.

Most innovative and original on the list by far is the Pure Lakes’ Scalp Hydrator, which I was personally really pleased to see entered this year. As a bald man of many (too many …) years standing, we ‘slap heads’ have long needed a grooming product specifically for that part of the body, so it’s great that formulators and brands are continuing to think beyond the mainstream and obvious in men’s skincare and body care.

Outside of free from, the landscape of men’s grooming continues to develop in ways which would have been unthinkable just a few years ago — It’s been quite an eye opener to see Veet for Men’s Hair Removal Cream, and Nivea for Men’s new Body Shaving range, which includes shaving stick, shaving gel, and after shave gel, all come onto the market. 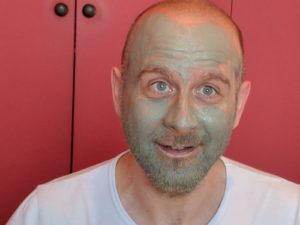 Whether we’ll be seeing ‘free from’ versions of these in future Awards is something we’ll all have to wait and see — and the prospect of finding willing male testers to try them out might be a challenging one! — but in the meantime, there are some other men’s products which I would like to see develop in the free from grooming market …

That scalp moisturiser is great — but some options with SPF would be doubly great. More dedicated oils for men, too, would be welcome — including body oils. Free from hair products — gels, conditioners, even hair oils could benefit men in just the same way as they do women. Products for teenage boys, perhaps. Men’s fragrances, too. Or how about face masks? Sure, why not — egged on by the female judges, I found myself experimenting with one this year, by Jenny Lee, and as you can see (right), my application skills need to be worked on …

I think ultimately producers of natural or ‘free from’ skincare would do well to keep reminding themselves that men have allergies too. Men are vegan too. Men look to avoid certain ingredients too. The developments in recent years have been terrific, but we still need greater selection of products catering for a wider selection of ‘free from’ needs.

Producers, formulators — it’s over to you!