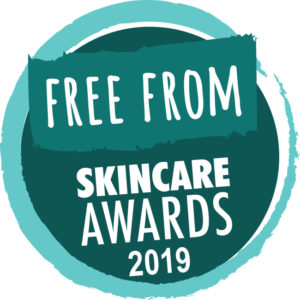 There is new guidance coming into effect for cosmetics in the EU from July 2019 concerning ‘free from’ claims.

This clearly concerns us as we look to launch the 2019 Free From Skincare Awards, and we have been asked many times for our views on the matter, and what action we will be taking. What follows is our response.

But first, a recap.

Our position on free from labelling in cosmetics

Broadly speaking, we approve of ‘free from’ (or ‘no’ or ‘does not contain’) labelling on cosmetics, when the statements are made for named ingredients or groups of ingredients.

We do not approve of ostentatious ‘free from’ labelling whose aim is to make an inappropriate virtue of the absence of a certain ingredient, or to fearmonger, or to jump on a trendy bandwagon. This is an abuse of ‘free from’ labelling. I can think of no better topical example than the shampoo from Herbal Essences, which I’ve written about here.

We do like ‘free from’ labelling that is discreet, given no more than equivalent prominence to the ingredients list, perhaps alongside it, on the back, so that people who need or want it can find it easily, and the attention of those who aren’t interested isn’t unnecessarily captured by it.

Brands using ‘free from’ labelling we like get credit during judging in the Awards — just one of many attributes we look for.

Brands using ‘free from’ labelling we’re less keen on are sometimes penalised during the judging stage, on a case-by-case basis, taking into account the views of the expert panel on the day.

There are six parts to it.

Part 1 is Legal Compliance. It states a ‘free from’ claim should not be made for a prohibited ingredient. We agree.

Part 2 is Truthfulness. The example given is that ‘free from formaldehyde’ should not be used if the product contains a formaldehyde-releasing preservative. No argument there.

Part 3 is Evidential Support. That ‘free from’ claims should be able to be substantiated. Fair enough.

And what we dislike …

Part 4 is Honesty. Of course we want honesty, but find the reasoning here problematic. The text reads: “”Free from” claims … should not be allowed when they refer to an ingredient typically not used in the particular kind of cosmetic”.

Our issue is that consumers do not have degrees in cosmetic chemistry, and are often unaware there is no SLS in a moisturiser, for example.

‘Free from’ labelling can reassure in such cases, especially those newly diagnosed with an allergy.

Part 5 is Fairness, and here we start running into real difficulty. “”Free from” claims … should not be allowed when they imply a denigrating message, notably when they are mainly based on a presumed negative perception on the safety of the ingredient”.

The examples given are for parabens, triclosan and phenoxyethanol. Our view is that a straightforward ‘free from’ claim never implies a denigrating message in itself. There is a world of difference between ‘free from parabens’ and ‘free from nasty parabens’.

There’s also a difference between ‘free from parabens’ on front-of-pack in 24pt font, and listing parabens within a small free from box on the back of the product alongside several absent ingredients.

It is not clear which other ingredients are deemed to have a ‘negative perception’ and which are not.

Part 6 is Informed Decision Making. “”Free from” claims … should be permitted when they allow an informed choice to a specific target group or groups of end users.”

Examples given are ‘free from alcohol’ (for a family product), ‘free from animal-derived ingredients’ (for vegans), or ‘free from acetone’ (for those looking to avoid the smell in nail polish).

Fine. But what about people with allergy? Do they not constitute ‘a specific group of end users’?

Of course they do. Or at least they ought to — given that ‘people who don’t like the smell of acetone’ appear to.

To us, this lies in the potential conflict between points 5 and 6 with respect to allergy.

Is the need of those with phenoxyethanol allergy to be informed something is ‘phenoxyethanol free’ secondary to the requirement to avoid its so-called denigrating message?

How does one adjudicate on whether ‘free from [fragrance]’ is or isn’t denigrating the fragrance, or whether fragrance sensitive people constitute a ‘specific group of end users’?

With thousands of potential ingredients, hundreds of them allergens, it seems the legislators have chosen to sidestep this problem entirely.

This absence of clarity fails the allergic community — the people for whom ‘free from’ labelling is arguably most valuable.

In defence of their dislike of ‘free from’ labelling, many cosmetic chemists are fond of pointing out that consumers should look at the ingredients.

We’re tired of hearing this. Consumers get confused at the mind-boggling array of chemical and Latin terms. Free from labelling helps them — and, last we heard, cosmetics labelling was there for consumers, not to satisfy dogmatists or powerful industry brands.

“Just read the ingredients!” is ignorant and ableist.

(It is also not fail-safe: if you want a formaldehyde free cosmetic, it’s no good reassuring yourself of the absence of the word ‘formaldehyde’ in the ingredients, because formaldehyde-releasers don’t feature the word in their names.)

Despite this, with regard to the Awards, we wish to emphasise that we will not penalise brands who, due to Annex III, feel they have to remove all or some free from labelling for fear of contravening the guidance / regulation when it comes into effect later in the year, when the 2019 Awards are over. Brands without ‘free from’ labelling but which meet our criteria will be more than welcome to apply.

However, we will also not penalise brands who do no wrong in our eyes.

This position may upset some, but over the years we have found it impossible to satisfy all. We launched our Awards for the consumer with ‘free from’ requirements — and they remain our priority.

If light is shone on the unclear aspects we have outlined, we will comment again, and either way, we will review and adjust our position, criteria and terms for the 2020 Free From Skincare Awards, accordingly.

But for now, given that Annex III is effective from July and entrants to the 2019 Free From Skincare Awards have to comply by law as it stands at entry deadline at end of April, we’re going to move on, and get ready for our launch, this year in early March.

Business as usual, then!