Food allergens in cosmetics: where do we go from here?

The issue of food allergens in cosmetics is a regular topic of online conversation in the food allergy community, and as the founders and organisers of the Free From Skincare Awards — which itself was largely inspired by its ‘big sibling’ the Free From Food Awards — it’s a subject we have been grappling with in one way or another for many years.

Last month on the first day of Free From Skincare Awards 2022 judging, we dedicated an hour with our judges to discuss the issue. Present were Ruth Holroyd of What Allergy, Alexa Baracaia, allergy author, allergy mum and founder of Allergy Hour, Abi Weeds, CEO of Odylique, as well as me (Alex) and Michelle from the Free From Awards team.

Food labelling law names 14 food allergens / groups of food allergens which must not only be named in lists of ingredients when present in food or drink, but emphasised in some way too (in practice, usually bold). Here’s an example:

You’ll see peanut, a tree nut (almond), milk and soya as the four emphasised allergens. Tree nuts constitute a single ‘group’ of the 14, and they include macadamia, hazelnut, Brazil nut and several others — but not shea, argan, or coconut, all of which are common in skincare.

On cosmetics — and by cosmetics we mean all products such as cleansers, moisturisers, deodorants as well as make-up — ingredients must also be listed, but via a naming system called INCI (International Nomenclature Cosmetic Ingredients). This is an internationally recognised, standardised system which designates specific names or terms to thousands of potential cosmetic ingredients, and which brands must use. This system helps regulators and scientists track and monitor particular ingredients — and all the studies and research associated with them. It also is designed to help consumers, who are reassured that any particular ingredients they are looking for should only appear in a particular given format.

Yet it can’t be denied that the format of these can be confusing, even impenetrable, to the everyday consumer. For most, it may not matter, but for allergic individuals, it very much does.

When it comes to plant-based ingredients, the tool for standardisation is the Latin binomial system, using the genus and the species. INCI rules specify that these be followed by the part of the plant used, and the nature of the preparation. Some brands incorporate the common or English name too, or list it separately, but not all do this. Here are two examples: 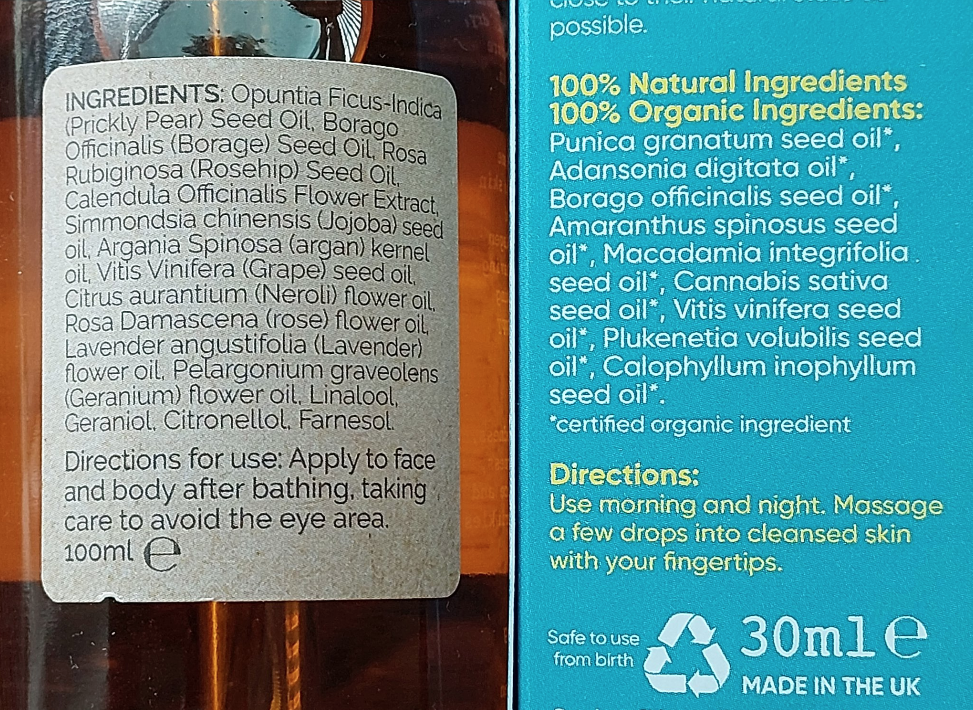 Each of these two oil blends is labelled correctly, with each ingredient in the “genus, species, part of plant (eg seed, flower), nature of ingredient (eg oil, extract)” format — but the one on the left gives an English translation in brackets for each one, and the one on the right doesn’t.

This is best seen in the “borago officinalis” (borage) oil ingredient, present in both.

Note that there is no requirement to emphasise — if it were a food, the product on the right would have to highlight the macadamia oil in some way.

One is that many food allergy folk have to learn their allergens in Latin and scrutinise labels for those expressions to spare them a potential reaction. Multiple food allergens? Multiple difficult names to memorise and check. This is time consuming and frustrating.

Another is that so used have food allergic people become to the ’emphasis’ system on food, that some may come to assume it is replicated on cosmetics too: a mistake 13-year-old Emilia is unlikely to ever make again.

A third, and less discussed, is a particularly serious one: some ingredients, including those sourced or based on non-plant allergens, may not declare from what they are derived, with the INCI giving no clue as to the source. Such ingredients include lysozyme (derived from egg) and colostrum and lactoferrin (derived from milk). At least one death can be in part attributed to this absence of full disclosure.

1. Why not have allergens in bold on skincare?

This is a common request, but it’s not one we support.

Cosmetics have so many potential allergens — fragrance components (including 26 which must be declared by law), preservatives, hair-colouring ingredients, lanolin and many others, which can cause allergic contact dermatitis and in extreme cases (with the hair-dye ingredient PPD), anaphylaxis. These are arguably more important than the food allergens. Emphasising only food allergens would detract from these others, and emphasising all of them would sometimes result in so many emphasised allergens to render the purpose of emphasis defeated.

But it would also require an enormous overhaul in the way cosmetics are labelled, at great expense to the industry. It would, I suspect, be resisted by powerful cosmetics companies.

Even if it were to be changed, that process would take years, and the inescapable truth is that in the meantime, those with food allergies have to know their Latin / INCI expressions in order to hope to safely negotiate the skincare world.

Yes, that would be a potential solution. The option is already there with the botanicals.

3. Insist on declaration of ingredient sources!

We’d like to see this, but are conscious of the fact that ingredients labels could get overly dense, and even more impenetrable than many currently are.

4. Would ‘Free From’ Labelling Help?

Yes, it would, but members of the mainstream cosmetics industry, including cosmetics bodies and many cosmetic chemists, have a deep dislike of ‘free from’ labelling, which to our mind is blinkered and damaging to people who need to avoid certain ingredients.

Several years ago, some contentious and to our mind very unclear and contradictory guidance on ‘free from’ labelling was issued by the EU, which some took to be an effective ‘banning’ of ‘free from’ statements. This is a complex issue. You can read more in my blog here of some years ago.

We suspect that the action to legislate against ‘free from’ labelling in cosmetics has made some brands nervous of using free from statements, making life more difficult for the people who need them.

What can we do?

It was concluded when we met that something we can do is encourage good practice. Encourage food allergen warnings (eg “contains nut oils”). Encourage English translations of botanicals. Encourage declaration of derivatives where possible. Encourage responsible use of ‘free from’ statements.

Furthermore, we will also re-open a dialogue with the CTPA (Cosmetic, Toiletry and Perfumery Association) on these subjects, especially in relation to ingredient sources and derivatives of allergens, to see whether there is anything we can do to improve industry practice, and perhaps try to get together a list of ingredients derived from allergens which could pose a potential risk.

We will keep you posted on progress. Ideas, and comments, very welcome!